You may need a modern cell phone and a swivel chair to have fun with this. Viewing on a computer screen is okay, but only just okay. For the full knock your socks off effect put your cell phone into Google Cardboard goggles like those shown on the right and immerse yourself into a view of a proposed hospital expansion and renovation.

As you drag the image you point the camera in a new direction (top half only - for the thumbnail view) and on a cell phone with the right sensors you simply move your head and the display follows along as though you are looking through a window. Click through to the most detailed view and click the Google Cardboard symbol in the lower right corner, slip your phone into the cardboard stereoscopic lenses and now you are looking down the hall and into rooms and out of windows. The swivel chair just makes it easy to turn. Its not really needed to have fun. 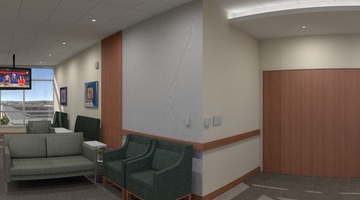 The coolest part of this technology is the simple way it can be shared on a web page. Click on the big white "VR360" on the lower half of the thumbnail view and it will open much wider, just like the other illustrations on this web site. Click again on the two icons in the lower right hand corner of the image and the most detailed version available will load. To go all the way to full screen or to enter stereoscopic cardboard mode, you must click the icon in the lower right corner one more time.

Stereoscopic 360 degree renderings are flagged with the text "VR360". VR stands for Virtual Reality even though they are a far stretch from reality and a pretty far strech from the high tech in this year's crop of games. Cnet has a great primer on virtual reality so I won't go over all the details here. The aim of most technology called virtual reality is highly immersive where someone puts on a headset and imagines they are somewhere else for a considerable amount of time. The views I am showing off here are closer to the sweet spot for Architectural Illustration. Not so imersive so as to get lost exploring every nook and cranny of a proposed development, but a fun step beyond typical illustration.

The same modeling process is used to create a VR360 view but the special part is a very different virtual camera. Using a script provided by Google to embed them in a web page these images respond to the sensors in modern cell phones and tablets and rotate to match how you point your viewing device. With the addition of a virtual reality headset, even as simple as Google Cardboard, the stereoscopic effect gives the scene depth. It makes you feel more like actually being there.

It is great that Google has provided a script for doing the heavy lifting of transforming a rendering that looks like the Raw Panoramic Stereoscopic Rendering on the right into the moveable VR360 you see below. The remaining drawback is that there is no facility yet to hyperlink from one image to the next. There are a few commercial scripts available that allow you to publish this way. I expect Google may add that feature to their script in the future. 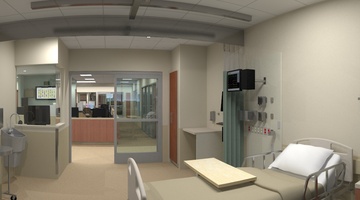 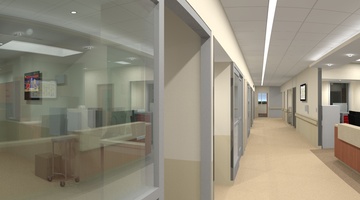 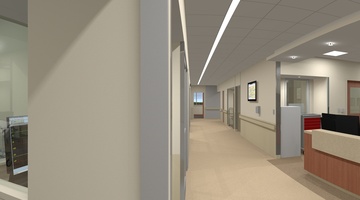 In the near future I hope we can virtually point at a "hot spot" down the hall, and move to that new camera location. For now we have to back out of the image, select the next, and plunge back in.

My daughter told me I needed a zombie standing behind you. Instead I have a man reaching out with a google cardboard headset. That's scary enough for me.